There’s a lot of skateboarding happening in Chinatown and the Downtown Eastside as a whole. From the classic Vancouver ‘it’ spot, Plaza, to crusty DIY and just making due with what there is. Some come to Chinatown to seek out spots and skate something different than their own hood, but for Flatspot Team riders Danny Smith and Andrew Grant, this is their home. I don’t mean that in some kind of ‘I’m a local’ generality either, these guys live right here in the heart of Chinatown and some of the gnarliest DTES has to offer…. that is until they slab over it with high-rise condos. #Resist

Mischa Chandler got a fancy camera loaned to him with a couple lenses*, so the four of us got together to hit up some of the spots around where they live and play a little skateboarders and photographers. Danny and Andy had a couple slappy spots in mind they wanted to hit and Danny was super keen on the Piggy Banks for some late night sticking it to the man.

*Shout out to Bruce for the camera loan. Check out his instagram here:

Ultimately we ended up at 3 spots with 2 cameras. Mischa was shooting Sony and I was on a Canon. Mischa had a 10-22mm, no flash (ha ha); I had a Fish-eye and a 50mm, but I had a flash. Neither of us are pro by any means!

First up we sessioned Two Dragons which is some varying steps and ledges that are generally pretty smooth and buttery. They give you the feel of pool coping with a familiar clack, clack, clack as your trucks rip over the bricks. Andy was mostly on the dick trick game, while Danny was pushing for some pop and looking to land bolts. 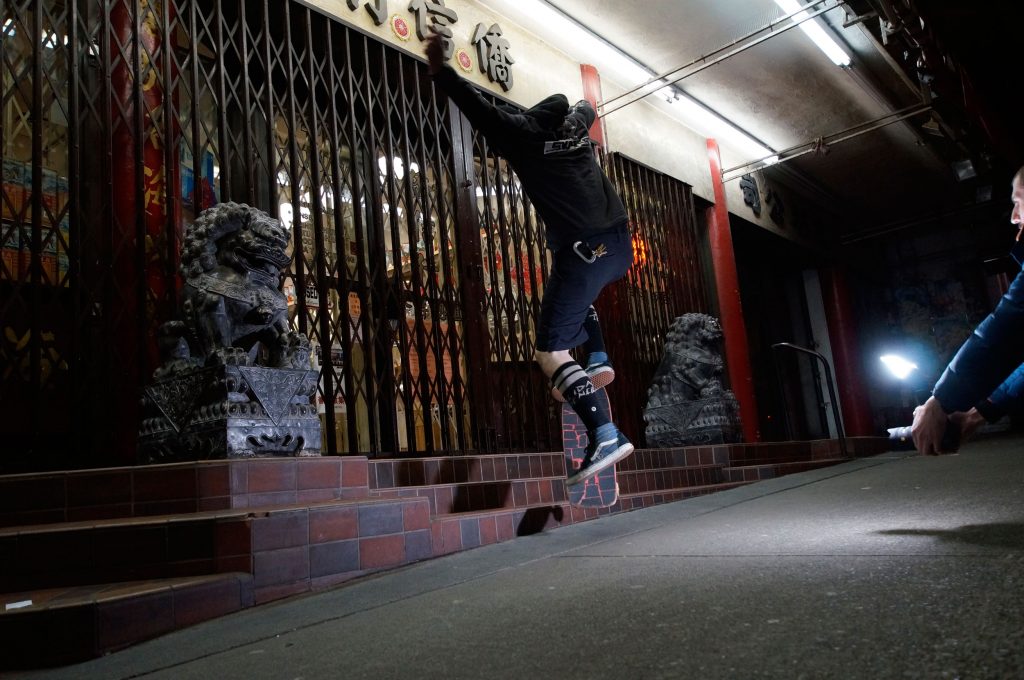 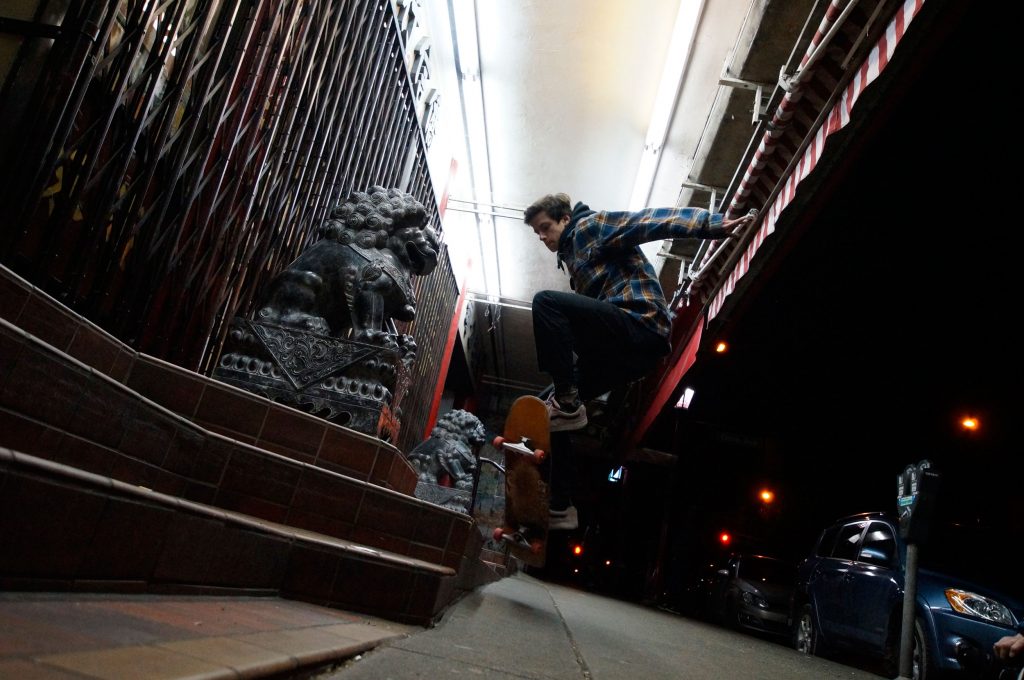 Haters will say this is photoshopped… 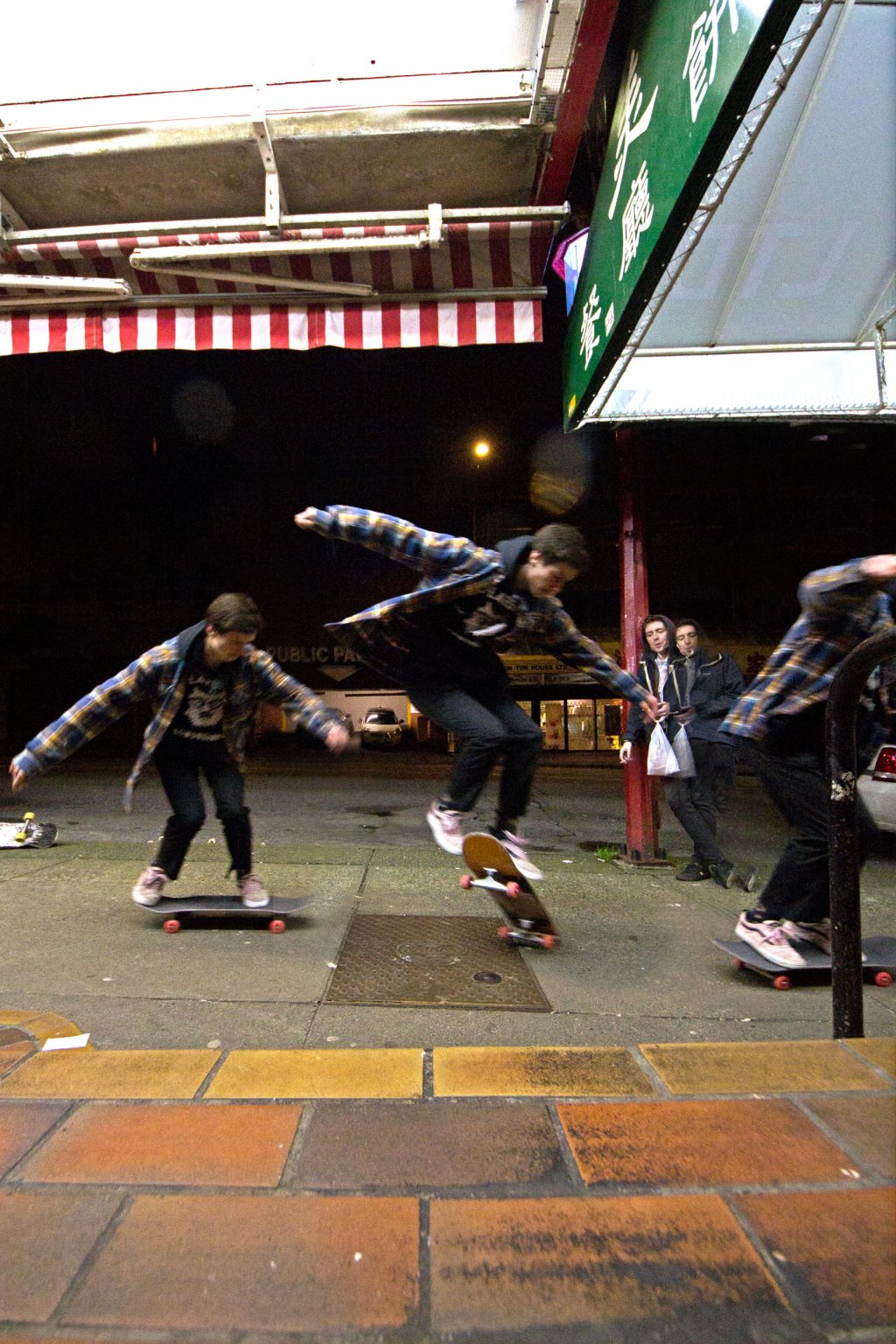 After a long lurk at the dragons, we made our way up and down some streets looking for some new new shit, when we ran into the usual suspect, Bob High, our friendly neighbourhood artist. Check out the photos from the Bob High inspired Low Brow Art Show here. 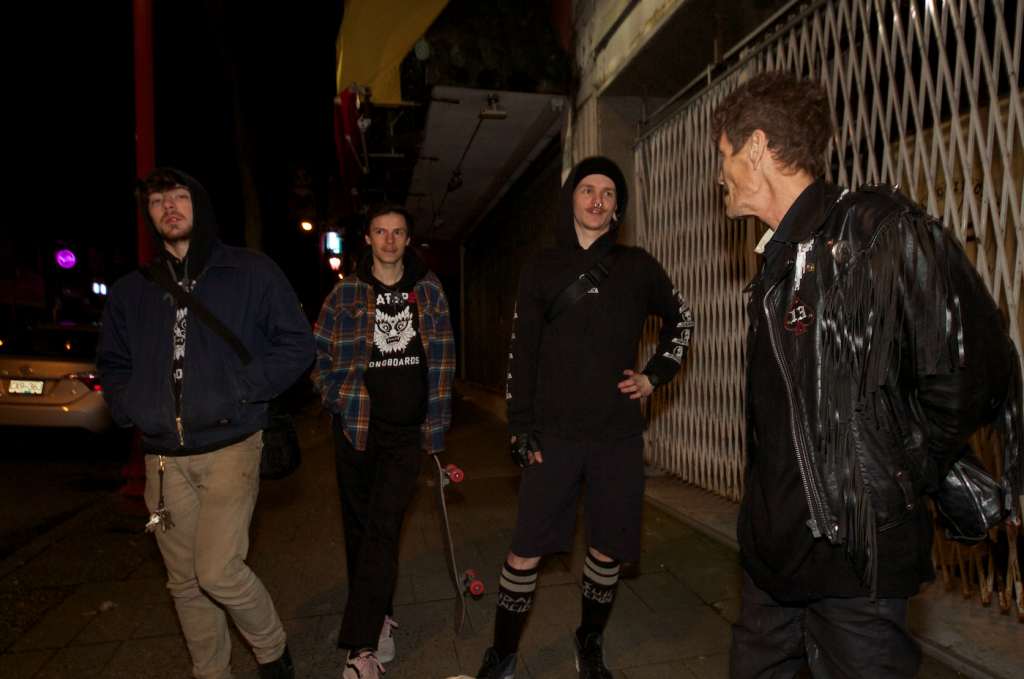 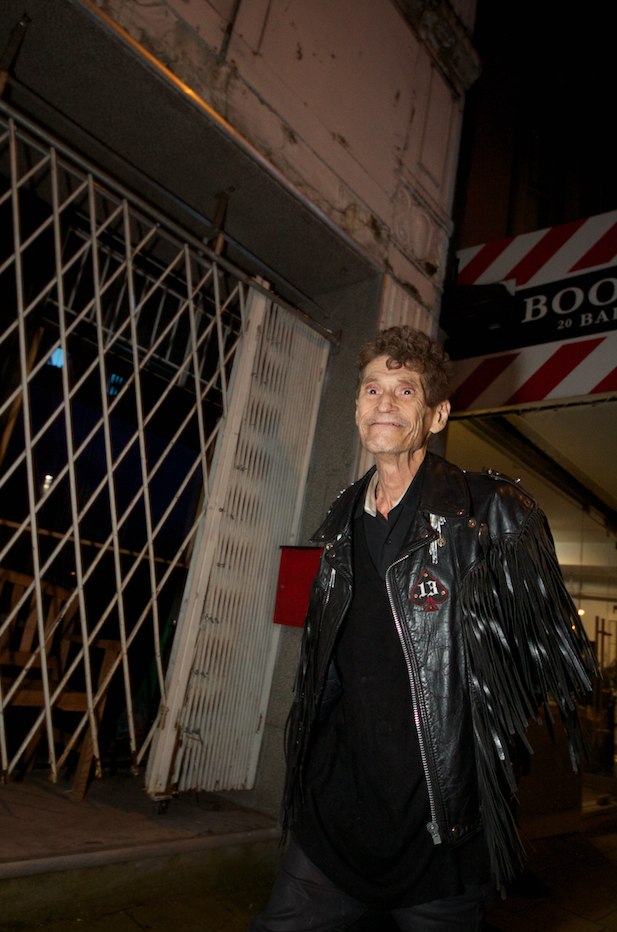 Parting ways with Bob, Danny found some fat to flat to play with in a highly suspicious spot right at a major intersection and possibly part of the court houses. With little room to roll in at all and lots of foot traffic, this was mostly just Danny dropping in big, but it was a lot of fun interacting with passersby and trying to figure out the best angle and light. Tough spot actually, out of the ones we shot that night anyways… 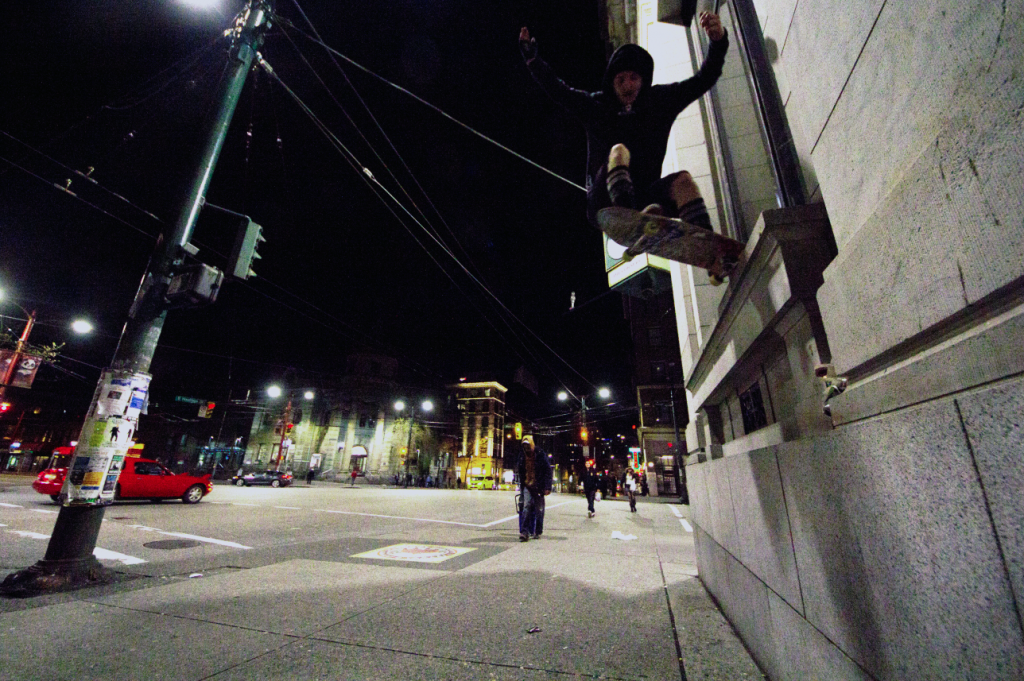 Andy had to take off for an earlyish bed time… he has a real job. Sort of. But Danny was down to continue and close out the night with a little civil disobedience and skate where we are explicitly told not to at the Piggy Banks. 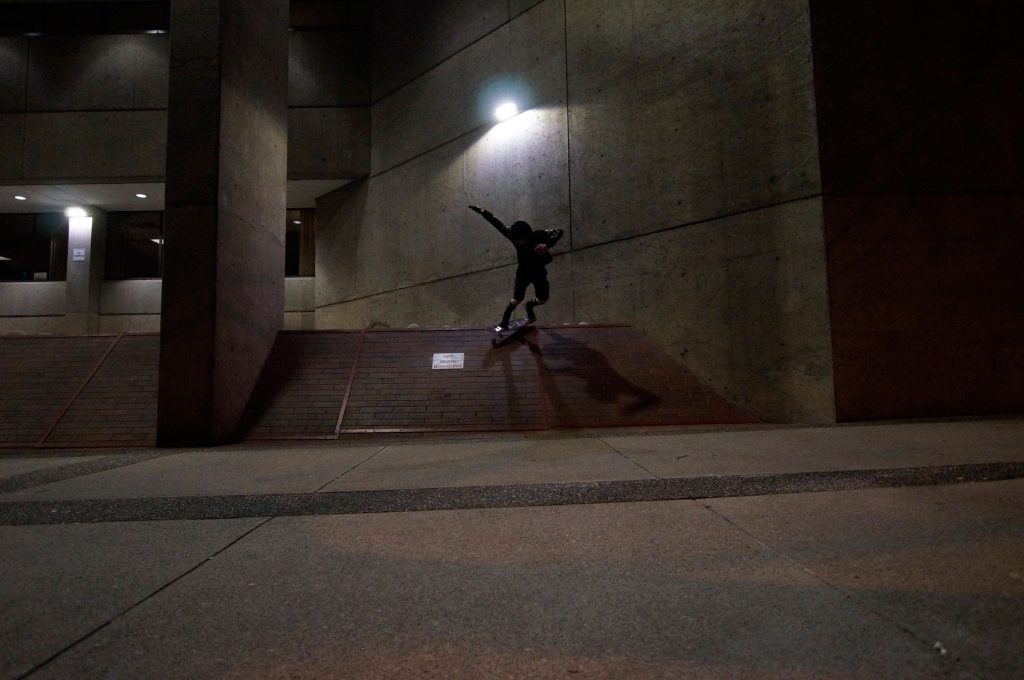 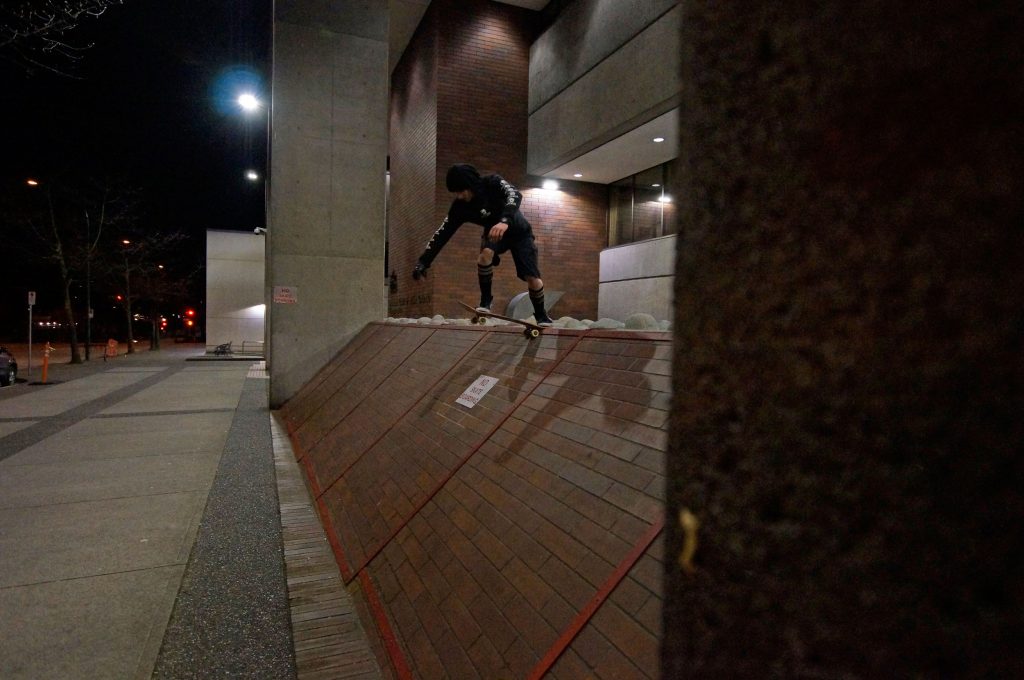 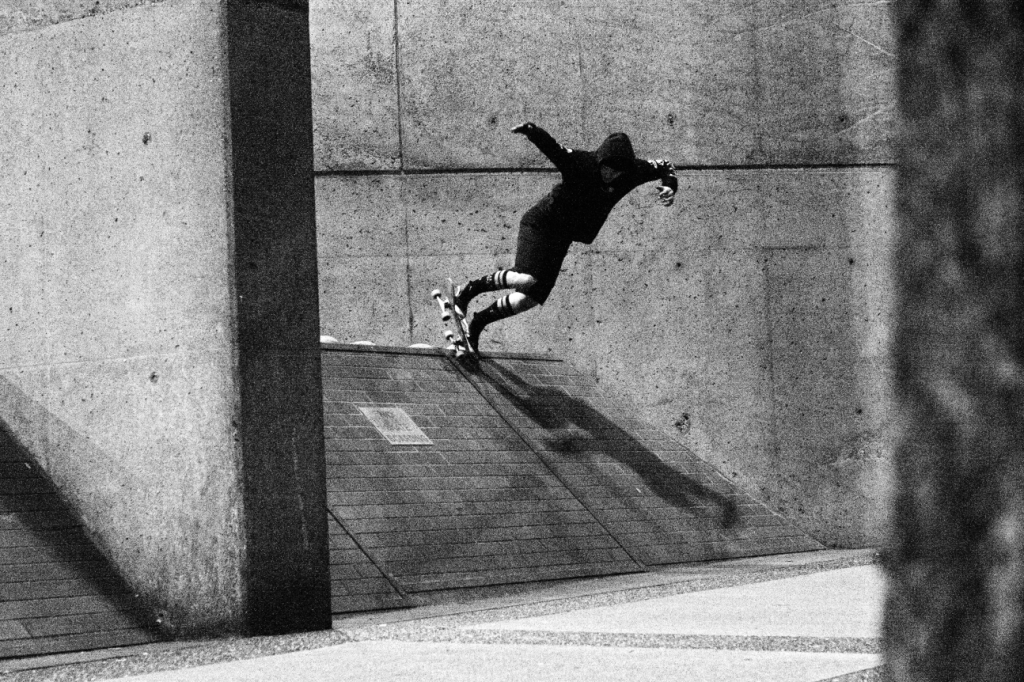 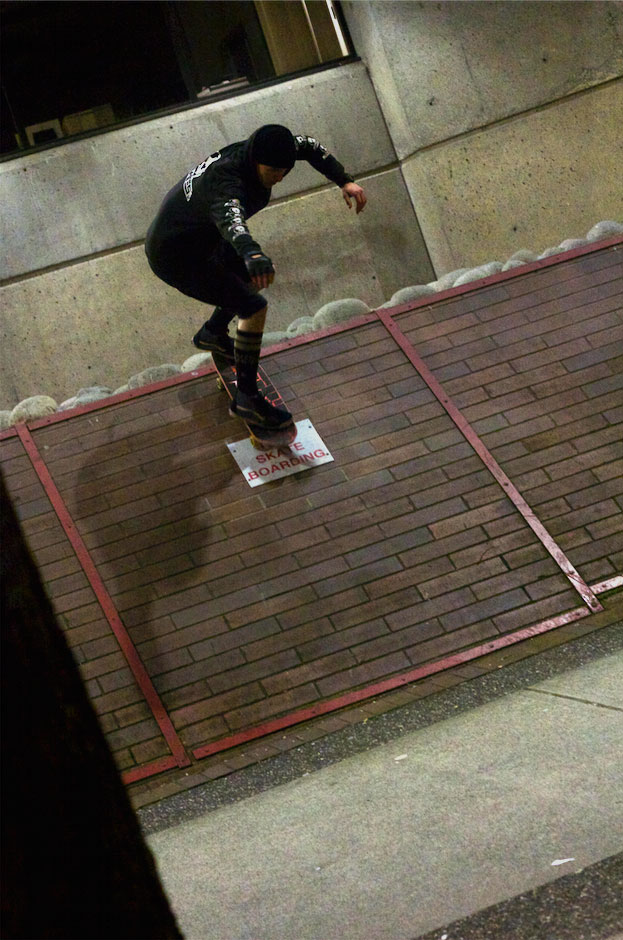 Okay that got weird.

Anyways, we were headed home and Danny decided he had an opening to hit the Carnegie steps quick. I had a 50mm on the camera from the banks still. I made my way out into traffic to get some distance, Mischa took to the side. Danny landed bolts. I personally think Mischa got the better shot, but you can decide for your self… 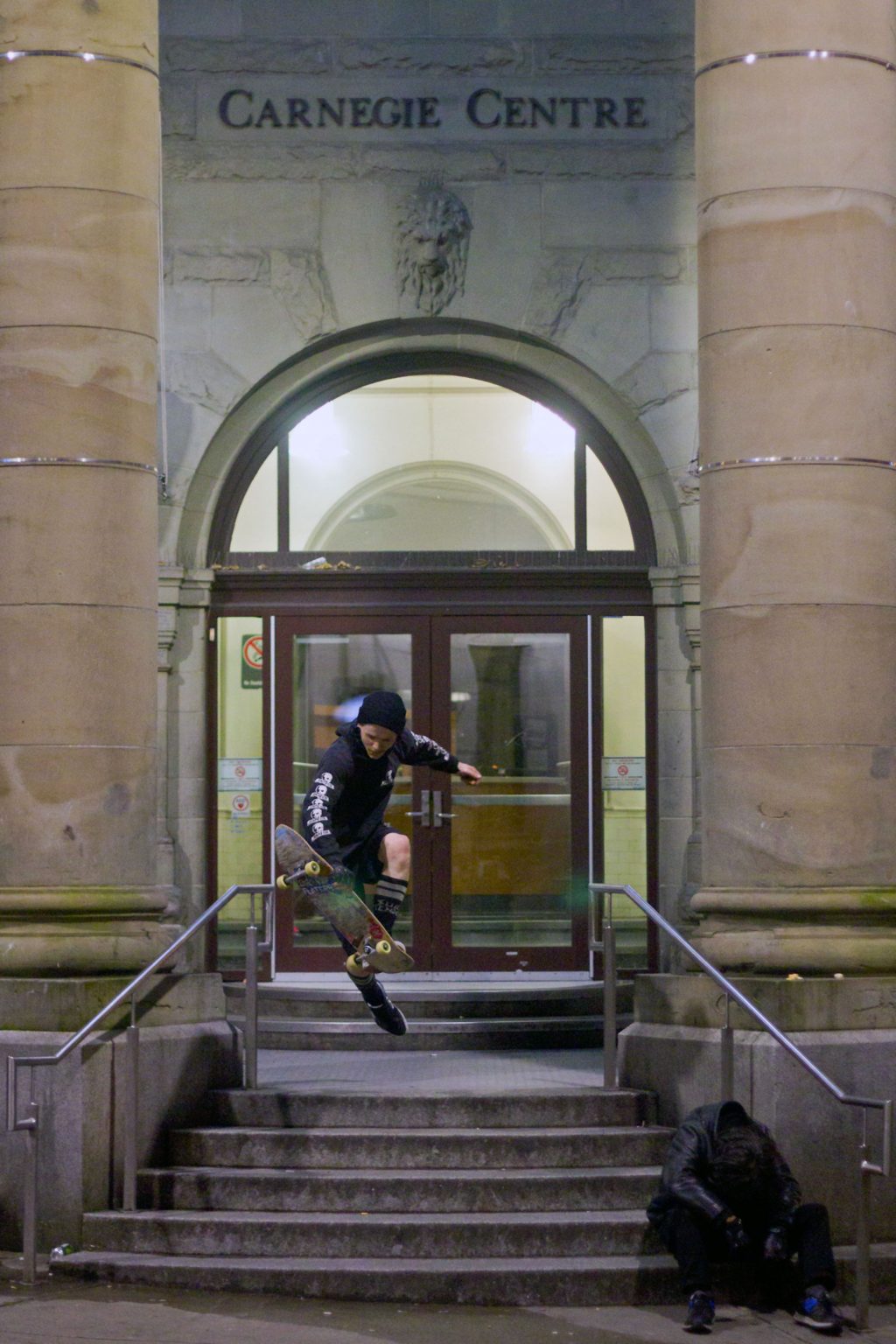 Want to help us decide whose photo is better? Submit a message below in the contact form. Tell us which photo you like more, Mischa (side) or Les (front). Who ever gets the most votes, gets their photo printed in large format (Mischa or Les) for the store. As a prize, we’ll pick one lucky winner and give a printed copy of that photo and a Flatspot T-shirt to one random entry from the side that won. Meaning, if you pick Mischa and he wins, then everyone who picked Mischa has a chance to win. If you pick Mischa and he loses, you’re out!

Here’s where you enter:

Okay, that’s it for now. We’re going to be heading out on more photo missions and sharing it here on the blog. Check back often for more. Be sure to subscribe to the newsletter below. We’ll announce the contest winner there first.

Papa Les at Flatspot
Papa Les has been skating, promoting and building the downhill community for many moons. Once a skate dad to many, he is now a real dad to his own spawn and spends more time in Vancouver behind a computer than he once was on the road in a Van. Helping lead the charge at Flatspot and Skate Slate, he continues to encourage everyone to skate as much as possible and always remember #walkingisforchumps.

No trackback or pingback available for this article.